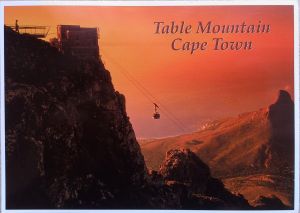 This gorgeous South African postcard is, surprisingly, not from Ruhan, but from Vanetia who lives in Cape Town. We had agreed to swap only one card and imagine my surprise when I received an envelope with three cards, and that beauty was one of the extra cards. I absolutely love it, it’s definitely one of my top 10 prettiest cards. ❤

Table Mountain (Afrikaans: Tafelberg) is a flat-topped mountain forming a prominent landmark overlooking the city of Cape Town in South Africa. It is a significant tourist attraction, with many visitors using the cableway or hiking to the top. The mountain forms part of the Table Mountain National Park. The view from the top of Table Mountain has been described as one of the most epic views in Africa.