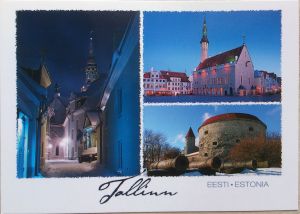 Another one from my pen pal Mikaela. 🙂 It pictures the Old town of Tallinn (left), Tallinn Town Hall (top right) and Fat Margaret’s Tower (bottom right).

The Tallinn Town Hall is a building in the Tallinn Old Town, Estonia, next to the Town Hall Square. It is the oldest town hall in the whole of the Baltic region and Scandinavia.

Fat Margaret’s tower was built in the early 16th century (from 1511 to 1530) during the reconstruction of the medieval city gate system. The etymology of the tower’s name derives from the fact that it was the largest part of the city’s fortifications with walls measuring 25 meters in diameter, 20 meters in height and up to 5 meters thick. Apart from being a fortification against would-be invaders to the port of the town, it was also built to impress outside visitors arriving by sea.

This one comes from Renew Family. 🙂

Saint Thomas is an island in the Caribbean Sea and, together with St. John and Water Island, forms a county and constituent district of the United States Virgin Islands (USVI), an unincorporated territory of the United States. Located on the island is the territorial capital and port of Charlotte Amalie. As of the 2010 census, the population of Saint Thomas was 51,634 about 48.5% of the US Virgin Islands total. The district has a land area of 31.24 square miles (80.9 km2).

This lovely Greek card comes from my pen pal Mikaela who went on a holiday there last year. Santorini is may be the most famous Greek island so it’s pointless to talk about it. I’ll just say this again: I just love, love, love cards that show something from the real life. 🙂

This lovely card comes from Jennifer. 🙂 She says: “We have many races here in Indonesia, each has its own costume, so we have quite a lot of traditional costumes. On the postcard, from left to right, are traditional costumes of: West Java, Bali, Sumatra, and Central Java.”

And here’s my first Postcrossing stamp. 😀

Koldinghus is a Danish royal castle in the town of Kolding on the south central part of the Jutland peninsula. The castle was founded in the 13th century and was expanded since with many functions ranging from fortress, royal residency, ruin, museum, and the location of numerous wartime negotiations. The castle was originally founded by Christoffer I in 1268 but the oldest remaining part of buildings is the north side facing the castle lake originally built by king Christoffer III (1441–1448).  Today the restored castle functions as a museum containing collections of furniture from the 16th century to present, Roman and Gothic church culture, older Danish paintings, crafts focused on ceramics and silver and shifting thematized exhibitions.

Here comes another beautiful Greek card from the lovely Milda who’s now at Crete. I’m so jealous of her! 😀 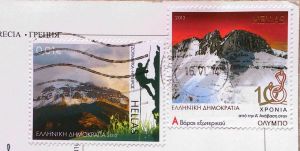 Gramvousa also Grampousa refers to two small uninhabited islands off the coast of north-western Crete in the regional unit of Chania.

Agria Gramvousa, which translates to Wild Gramvousa, is much less hospitable and is located due north of Imeri Gramvousa.

Fittingly, for an island that has accommodated pirates, there is a lagoon, named the Balos lagoon (shown on my postcard), between the island and the coast of Crete. There is an islet which forms part of a cape, through the lagoon, called Cap Tigani (which means “frying pan” in Greek). North of Balos, at the Korykon cape, are the ruins of the small ancient Roman city of Agnion, with a temple to the god Apollo.

My first postcard from Lesotho comes from Julius. 🙂 I just love that type of postcards – the ones that show something from the daily/real life in the country. 🙂

Lesotho, officially the Kingdom of Lesotho, is a landlocked country completely surrounded by South Africa. It is just over 30,000 km2 in size and has a population slightly over two million. Its capital and largest city is Maseru. Lesotho is a member of the Commonwealth of Nations. The name Lesotho translates roughly into the land of the people who speak Sotho. About 40% of the population lives below the international poverty line of US $1.25 a day.

My first card from Uruguay comes from Rubén. 🙂 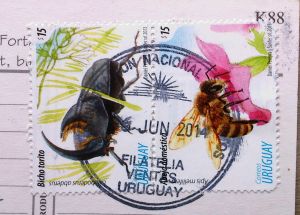 Fortaleza del Cerro, also known as Fortaleza General Artigas, is a fortress situated in Montevideo, Uruguay overlooking the Bay of Montevideo. It belongs to the barrio of Casabó, at the west of Villa del Cerro. It holds a dominant position on the highest hill of the department of Montevideo (popularly known as Cerro de Montevideo with its altitude of 134 meters above sea level the sea, on the opposite side of the bay. Its function was to defend the population of Montevideo and its port, on the río de la Plata. Governor Francisco Xavier de Elío ordered construction in 1809 and it was completed in 1839; this was the last Spanish fort built in Uruguay. It has housed the Military Museum since 1916.

This map of Montenegro comes from Justine. 🙂

Montenegro is a country in Southeastern Europe. Its capital and largest city is Podgorica, while Cetinje is designated as the Prijestonica, meaning the former Royal Capital City. From 1918, it was a part of Yugoslavia. On the basis of an independence referendum held on 21 May 2006, Montenegro declared independence from Serbia on 3 June of that year. 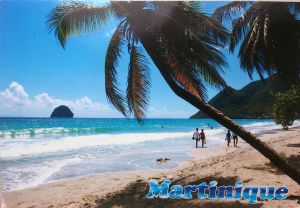 Martinique is an island in the Lesser Antilles in the eastern Caribbean Sea, with a land area of 1,128 square kilometres and a population of 386,486 inhabitants (as of Jan. 2013). Like Guadeloupe, it is an overseas region of France, consisting of a single overseas department. One of the Windward Islands, it is directly north of Saint Lucia, northwest of Barbados, and south of Dominica.

As with the other overseas departments, Martinique is one of the twenty-seven regions of France (being an overseas region) and an integral part of the French Republic. As part of France, Martinique is part of the European Union, and its currency is the euro. The official language is French, although many of its inhabitants also speak Antillean Creole (Créole Martiniquais).

The world in my mailbox…
Create a free website or blog at WordPress.com.