This postcard, my second one from Belarus, comes from Aliona. It pictures the Vitebsk Station on the left and the monumental and decorative sculpture “Meeting” on the right.

Vitebsk or Vitsebsk, is a city in Belarus. The capital of the Vitebsk Region, in 2004 it had 342,381 inhabitants, making it the country’s fourth largest city. Typically assigned a founding date of 974, Vitebsk has long been an important cultural and commercial hub for the numerous occupiers in its long history. It is still an important centre of arts and culture for the Republic of Belarus and is surrounded by stunning countryside. Vitebsk is often referred to as the “Cultural Capital” of Belarus. It is best known as the birthplace of the Jewish painter Marc Chagall, and his home has been preserved and operates as a museum. There is also a museum dedicated to his works that also frequently hosts exhibitions by the city’s large modernist/post-modernist/avant garde artist community. 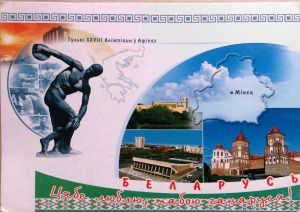 This card came from Elena from Belarus.

The most curious thing about this belarusian postcard is why there is a greek Diskobolus on it. 😀

In the right corner is the most popular belarusian sight – the Mir Castle, which is on the UNESCO World heritage list. The construction of this castle began at the end of the 15th century, in Gothic style. It was subsequently extended and reconstructed, first in the Renaissance and then in the Baroque style. After being abandoned for nearly a century and suffering severe damage during the Napoleonic period, the castle was restored at the end of the 19th century, with the addition of a number of other elements and the landscaping of the surrounding area as a park. Its present form is graphic testimony to its often turbulent history.