From my wonderful pen pal Elena. 🙂 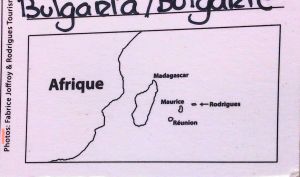 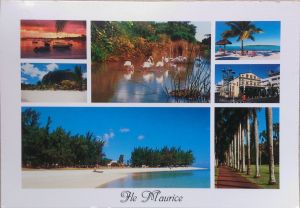 My second card from Mauritius  comes from Swadick. 🙂 What a beaitiful island indeed!

Mauritius is one of the world’s top luxury tourism destinations. It possesses a wide range of natural and man-made attractions, enjoys a tropical climate with clear warm sea waters, attractive beaches, tropical fauna and flora complemented by a multi-ethnic and cultural population that is friendly and welcoming. These tourism assets are its main strength, especially since they are backed up by well-designed and run hotels, and reliable and operational services and infrastructures. Mauritius received the World Leading island Destination award for the third time and World’s Best Beach at the World Travel Awards in January 2012.

My very first card from the beautiful island of Mauritius comes from Tasneem. 🙂

Mauritius is an island nation in the Indian Ocean about 2,000 kilometres off the southeast coast of the African continent. The country includes the islands of Mauritius, Rodrigues, the islands of Agalega and the archipelago Saint Brandon.

The first Portuguese explorers found no indigenous people living on the island in 1507. The Dutch settled on the island in 1638 and abandoned it in 1710. Five years later, the island became a French colony and was renamed Isle de France. The British took control of Mauritius in 1810 during the Napoleonic Wars. The country remained under British rule until it became an independent Commonwealth realm on 12 March 1968 and a republic within the Commonwealth on 12 March 1992.

The country is multi-ethnic and multi-cultural; most Mauritians are multilingual, and English, French, Creole and Asian languages are used. The government system is closely modelled on the Westminster parliamentary system. Mauritius is highly ranked for democracy and for economic and political freedom.

The island of Mauritius was the only home of the Dodo bird. The bird became extinct fewer than eighty years after its discovery.