This one comes from Jetske. 🙂 It pictures the most Dutch things ever – windmills and tulips. Jetske says that the traditional clothing (bottom left corner) is from the region Zeeland.

Those 3 Alice in Wonderland postcards came from Gusta from the Netherlands, this was one of the nicest swaps I’ve ever arranged. ❤

Alice in Wonderland is certainly not my favorite book. And while I dislike it in general, I very much like its idea, I also like a few of Lewis Carroll’s quotes. On the back of the cards Gusta has written a few quotes for me. She says her favorite one (also one of my favorite ones) is: “If I had a world of my own, everything would be nonsense. Nothing would be what it is, because everything would be what it isn’t. And contrary wise, what is, it wouldn’t be. And what it wouldn’t be, it would. You see?”

There was also a pretty pink bonus card in the envelope: 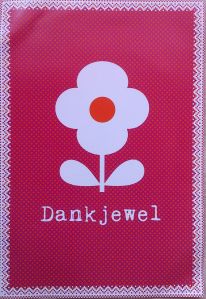 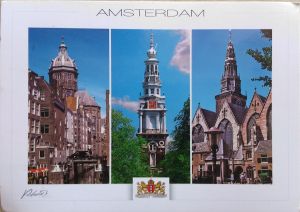 I received this card via Postcrossing. And I’m a little embarrassed to say that I can’t read the writing on the back, so I’m not sure who sent me this. 😀

But I know that it came from The Netherlands and it pictures 3 churches (from left to right):

1) The Basilica of St. Nicholas (or Sint-Nicolaasbasiliek in Dutch) is located in the Old Centre district of Amsterdam, Netherlands. It is the city’s major Catholic church.

2) The Zuiderkerk (“southern church”) is a 17th Century Protestant church in the Nieuwmarkt area of Amsterdam, The Netherlands. The church played an important part in the life of Rembrandt and was the subject of a painting by Claude Monet.

3) Oude Kerk (“old church”) is Amsterdam’s oldest building and oldest parish church, founded ca. 1213 and finally consecrated in 1306 by the bishop of Utrecht with Saint Nicolas as its patron saint. After the Reformation in 1578 it became a Calvinist church, which it remains today. It stands in De Wallen, now Amsterdam’s main red-light district. The square surrounding the church is the Oudekerksplein.

I received this postcard from Karin from the Netherlands via Postcrossing. And my first thought was “The most dutch postcard ever”. 😀 (And later I remembered the most dutch picture ever.)

I’ve written in my profile on Postcrossing that I’d like to receive cards that show something typical for the country and for example I’ve written “If you’re from the Netherlands – send me windmills or clogs.” I guess Karin has taken my example very seriously and this is the result – windmill-shaped card with clogs on it. It’s really awesome! 😀 Thank you, Karin! 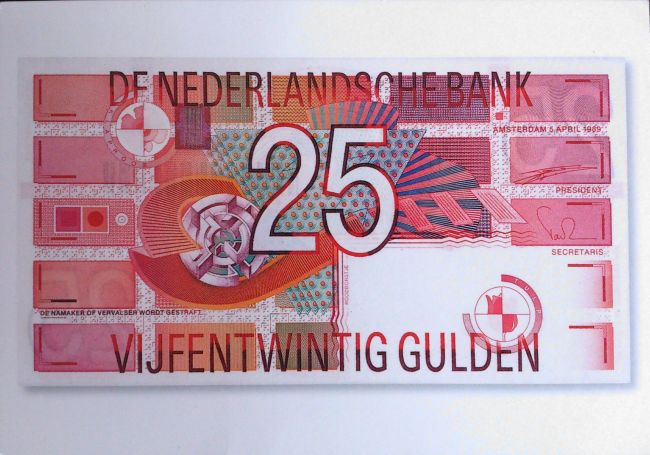 This card came from Britt from Den Haag. 🙂

The Dutch gulden was the currency of the Netherlands from the 17th century until 2002, when it was replaced by the euro. The Dutch name gulden was a Middle Dutch adjective meaning “golden”, and the name indicates the coins were originally made of gold.
The exact exchange rate, still relevant for old contracts and for exchange of the legacy currency for euros at the central bank, is 2.20371 Dutch guilders (NLG) for 1 euro (EUR). Inverted, this gives EUR 0.453780 for NLG 1. So I guess my 25-gulden postcard equals about 11 euro. 😀