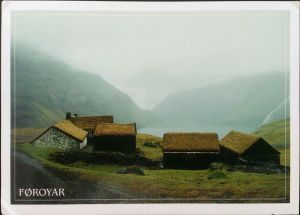 This is one of my all time favorite postcards! 😀 It comes from Jiayi who’s originally from China but was on a trip to Faroe Islands. 🙂

The Faroe Islands (in Faroese: Føroyar) are 18 islands in the middle of the North Atlantic Ocean, northwest of Scotland and halfway between Iceland and Norway. The Islands are a self-governing island territory of Denmark, although they politically aim for higher independence. The Islands have a population of nearly 50,000, and a language and culture of their own. When visiting the Faroes you are never more than 5 km away from the ocean. The countryside is dominated by steep mountains and there are about 70,000 sheep and some 2 million pairs of seabirds, including the largest colony of storm petrels in the world. The Faroe Islands are undeniably beautiful: green, rugged and wind-swept. Most visitors to the islands come between early July and late August.